The makers of The Constitution of India adopted the Parliamentary System of executive for the governments both at the National and State levels.

According to this system, there is a President who is the formal Head of the State and the Prime Minister and the Council of Ministers, which run the government at National level.

The Constitution of India vests the executive power of the Union in the President.

The President exercises these powers through the Council of Ministers headed by the Prime Minister.

Articles 52 to 78 in Part V of the Constitution deals with the Union Executive.

According to Article 52, there shall be a President of India.

Article 53 says, that the President shall be the head of the Union Executive.

Under this article we will learn about the following topics related to the President of India:

Election of the President

Article 54 deals with the Election of the President.

According to the Constitution, the President of India is elected by an ‘electoral college’ through proportional representation by means of single transferrable vote. 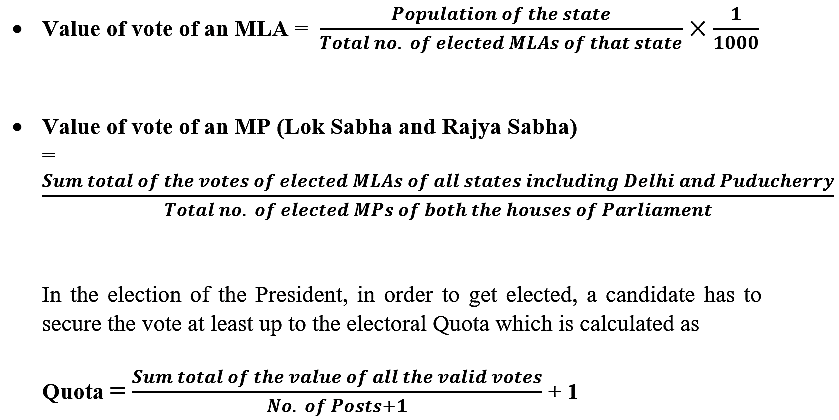 (At least 50% votes must be secured by the Candidate).

The method of election for President is proportional representation by means of single-transferable vote.

Qualifications For the President

In order to be qualified for election as President, a person must be-

The following are not disqualified for election as President:

Any disputes regarding election of the President or Vice-President or about their disqualification can be decided only by the Supreme Court.

Impeachment of the President

According to Article 61, the President of India can be impeached only on the ground of violation of the constitution. Thus, there is no other way to remove the President from the office of President. The process of impeachment is as follows:

Powers and duties of the President

According to Article 53, the President of India shall be the head of the ‘executive power’ of the Union.

By executive power, it means the ‘the power of carrying on the business of government’ except functions that are vested in any other authority by the constitution.

The Supreme Court has included the following functions under the ambit of executive powers:

The Powers of the President are as follows:

Constitutional Limitations on Power of President

Since, the President is the head of Union Executive, all the administrative decisions of the union are taken in the name of the president.

But the Indian President does not control or supervise over the Departments of the Government. He is only the formal head of the administration.

Also, according to the Article 78(b), the President has the right to be informed of the affairs of the Union.

According to the Constitution of India:

The President is an integral part of the Parliament. He performs following legislative functions:

According to Article 123, if Parliament is not in session and there is an urgency to pass any law; then President on the advice of Union Council of Ministers, then President can issue ordinances.

Ordinances is considered as a temporary law, having maximum validity period of 6 months. However, within this period when Parliament re-assembles, in order to continue it a law, it must be passed by both the houses within 6 weeks from the date of re-assemblance of the Parliament; otherwise it ceases to exist after the expiry of the said period.

It is a negative power, the President of India is having a variety of Veto powers such as absolute veto, suspensive veto and pocket veto. The Veto cannot be exercised on 2 types of bills:

Other than these two bills, if a bill is passed by both the houses of the Parliament and presented to the President for his assent; and the bill is rejected by the President, there is death of the bill, this is called as Absolute Veto.

However, the President can exercise Absolute Veto only on two types of Bills –

Therefore, the Absolute Veto power of the President is very limited.

If a bill is passed by both the houses of the Parliament, sent to the President for his assent; and the President sit over the bill for indefinite period it means neither he gives his assent nor returns the Bill for reconsideration. This is called as Pocket-Veto.

He can exercise Pocket-Veto because constitution is silent about the time limit within which and President is required to give his assent.

The President has the power to pardon, reprieve, respite or to remit, commute or suspend the punishment of any accused person if-

Pardon means to set the offender completely free or to absolve him completely.

It means exchange of one form of punishment into another lighter form. i.e., Death Sentence to life imprisonment.

It means awarding a lesser punishment on special ground. i.e., In case of pregnant offender, rigorous imprisonment can be changed into simple imprisonment.

This is an extra ordinary power assigned to the President by the Constitution to deal with extra-ordinary situations. There are 3 types of Emergencies:

In following situations President can exercise his discretion –