The complete breakdown of glucose into carbon dioxide and water in the presence of absence of oxygen to provide energy to the cells is called cellular respiration.

The breakdown of the six-molecule glucose into three molecule pyruvate takes place in the cytoplasm of the cell.

Further, the pyruvate may be converted into ethanol and carbon dioxide.

Anaerobic Respiration: If the process of breakdown of glucose takes place without the oxygen, then it is called anaerobic respiration. For example, fermentation of yeast.

Aerobic Respiration: If the process of breakdown of glucose takes place with the help of oxygen, then it is called aerobic respiration. It takes place in mitochondria. 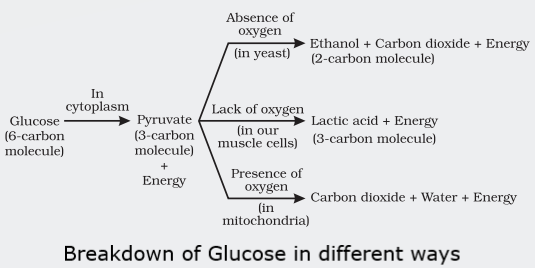 This process breaks up the three-carbon pyruvate molecule to give three molecules of carbon dioxide along with water.

The energy released during cellular respiration is immediately used to synthesis a molecule called ATP. It is used to fuel all other activities in a cell.

ATP is the smallest unit of energy required for cellular processes. The energy released during the respiration is used to make a molecule of ATP molecule from ADP and inorganic phosphate.

Since aerobic respiration requires exchange of oxygen and carbon dioxide, therefore, there are mechanisms for the exchange of gases in plants and other living organisms.

Click to read more about the exchange of gases through diffusion in plants.

Maximization of area of lungs for exchange of gases 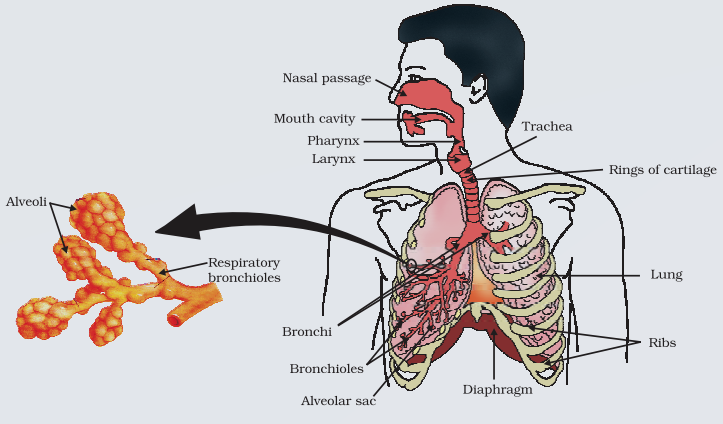 The respiratory system includes the following: