The Vedic time is divided into two phases, these are:

Note: Prior to Aryans there was no Sanskrit language, it was introduced in India by Aryans.

How did we come to know to about Vedic culture and society?

Well, the literary source of the Vedic time is the Vedas. Some characteristics of Vedas are:

Other than the four vedas, the other compositions of the vedic period are:

Brahmanas: were comments on Vedas.

Upanishads: were the philosophical books, contains talks about Atma (individual soul) and Brahman (the ultimate soul) and       about Salvation (Moksh):

· Total number of Upanishads are 108

· One of the earliest Upanishad is Mundaka Upanishad, in which there is a reference of ‘Satyamev Jayate’.

· In ‘Brihadranyaka Upanishad’ there is a reference to ‘ Tamso ma jyotirgamaya’

Puranas: there were total 18 purans in vedic literature.

These were mythological books, all hindu mythology.

These were composed in 4th century AD, written down during ‘Gupta Period’.

Religion and India are inseparable terms. The presence of religion in India goes as back as the making of the India or Bharat.

Let us look into the religion during the Rig Vedic and Later Vedic times:

The Bhagwat Gita was added during the Gupta Period.

Let us compare and learn about the social conditions and the position of women in the Rig Vedic and the Later Vedic period. 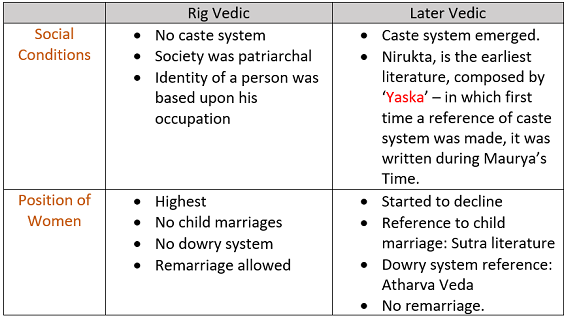 Some of the characteristics of the economic system during the Vedic times are:

Let us compare and discuss the difference and similarities between the economic the system during the Rig Vedic time and the Later Vedic time:

Most important crops were:

The society was mainly tribal with one chief and other tribal people. Some of the characteristics of the both Rig Vedic and Later Vedic societies are: